Research by BME's Kang Aims at Stopping Cancer With a Smartphone 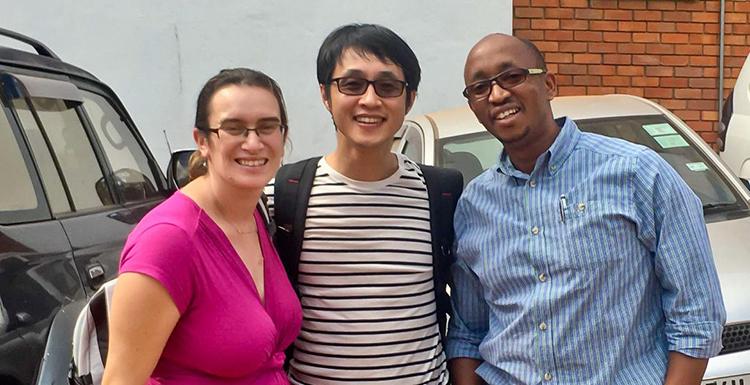 Assistant professorDongkyun "DK" Kang of the Department of Biomedical Engineering and the College of Optical Sciences was in the shower a few years ago when inspiration struck, and he became interested in the idea of imaging human tissue in vivo, or on a living person, using a smartphone attached to a microscope.

“I started looking for clinical applications where it would be useful, and that’s how I met Esther Freeman, the director of global health dermatology at Massachusetts General Hospital, who has been working to treat the skin cancer Kaposi’s sarcoma in Africa for almost a decade,” he said. “She had a clinical problem. I had an interesting technology that could potentially help.”

Kang did help, working with Freeman and Aggrey Semeere, a physician in Uganda, to develop a device allowing clinicians in rural clinics to diagnose Kaposi’s sarcoma using smartphone confocal microscopes, or imaging devices that collect light from a single pinhole to create high-resolution images viewable on a smartphone. The low cost, easy-to-use and portable devices have a potential to make early diagnosis, more effective treatment and lower mortality rates possible. Now, Kang is using a grant from the John E. Fogarty International Center to extend the same technology to screening for cervical cancer and cervical precancer.

“Not only does DK create novel biomedical optics tools, but he puts them to use to help the world’s most underserved people,” said Jennifer Barton, professor of biomedical engineering and director of the BIO5 Institute. Barton is a leader in developing cancer-screening endoscopes and mentored Kang for this project. “His new cervical cancer point-of-care detection device will help ensure that no woman dies from this disease, which is eminently curable if caught early.”