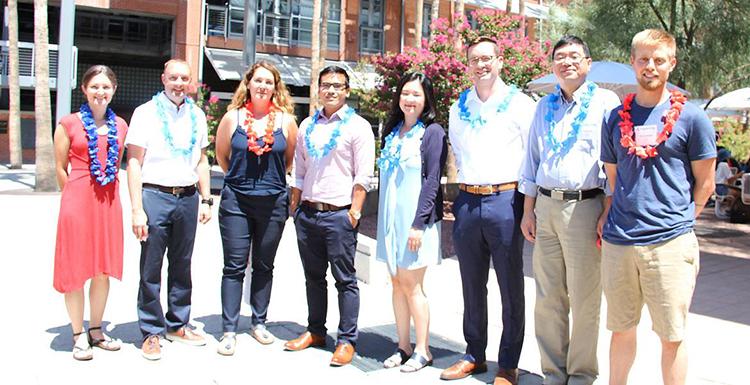 New faculty celebrate the beginning of the semester. BME's Elizabeth Hutchinson is on the far left; Jil Tardiff is not pictured.

Elizabeth Hutchinson, who holds a bachelor’s degree in physics and a doctorate in neuroscience, started in BME after nearly seven years at the National Institutes of Health.

She looks forward to leading her own lab and interacting daily with students. She aims to increase the effect of neuroimaging on understanding and treating human brain disorders by using animal models.

“I have this combination of basic sciences, such as physics, and of neuroscience,” she said. “I’ve always wanted to bridge the two, and I think biomedical engineering emerged as a field that already has the capacity to do that.”

Jil Tardiff has been on the faculty at the UA College of Medicine – Tucson, with a joint appointment in BME, since 2012. Because the field fits well with her research in biophysics and drug delivery, she’s been increasing her involvement with BME over time -- even mentoring several graduate students. In fall 2019, her primary appointment moved to the department.

“The leadership in BME, and in engineering in general, is very strong and forward-looking,” she said. “It’s an exciting and growing department at the UA.”

Tardiff, a physician-scientist who is also the Gootter Endowed Chair for the Prevention of Sudden Cardiac Death, the director of the Hypertrophic Cardiomyopathy Clinic, and a member of the Sarver Heart Center and BIO5 Institute, looks forward to strengthening the ties between the College of Engineering and the College of Medicine.