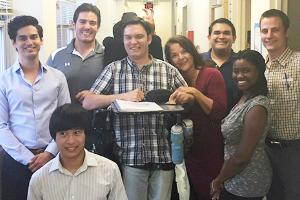 On May 1, at Engineering Design Day 2017, BME seniors played roles in a variety of projects ranging from an improved feeding tube sensor to an automated macadamia nut harvester.

The team even met with collaborators at Barrow Neurological Institute in Phoenix, which helped inform the design of the apparatus that will enable Jeffrey to maintain an upright position and exercise muscles needed to walk.

Emily Evans of Team 16063 won the first-prize Kristy Pearson Fish Out of Water Award, for her part in the project Autonomous Macadamia Nut Harvester Enhancement.