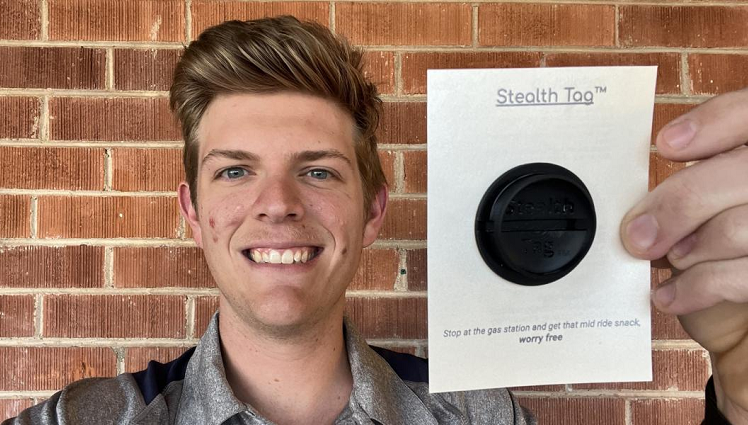 For the first few years of college, Spencer Ciammitti raced mountain bikes professionally around the country as part of the Bear National Team. Now, he’s a biomedical engineering major and the vice president of the University of Arizona cycling team, where he helps with the mountain bike program. He is also a member of the Medical Device Club, formerly serving as the outreach coordinator.

During the pandemic, Ciammitti took a BME course that involved using 3D printers in the Peter and Nancy Salter Medical Device Design Lab. He was fascinated by the process of going from computer design to a physical object so quickly, and – stuck inside during the pandemic – bought his own printer for a few hundred dollars to experiment with at home.

He recently designed a product called Stealth Tag, which allows cyclists to track the location of their bikes if they are stolen. About the size of a bottlecap, StealthTag is designed to hold an Apple AirTag, a small tracking device released in 2021. It allows users to secure and hide the tracking device in the bike’s steerer tube. Ciammitti began selling the 3D-printed device for $15 in January 2022.

How did the idea for Stealth Tag come about?

The idea really came to me a couple years ago when I got my racing bikes stolen. Us cyclists have expensive bike computers that tell us where we are on the roads and trails. I found it interesting that no one had implemented that technology into a hidden device in the bikes to track them in case they were stolen. When I got into 3D printing, the Apple AirTag system had just been released and, conveniently, they were the perfect size to hide away in a bicycle fork.

Why did you choose to major in biomedical engineering at the University of Arizona?

I chose the University of Arizona after looking at a couple schools for engineering, due to the amazing faculty, opportunities for extracurriculars, and the cycling community in Tucson, as I used to race professionally. The UA also offered a generous scholarship, which helped entice me to move. I hopped around a few different colleges at the UA before landing in biomedical engineering. I loved the math side of engineering, and the biology and chemistry of physiology. BME is the perfect blend of those two fields, and I could not be happier now that I chose it!