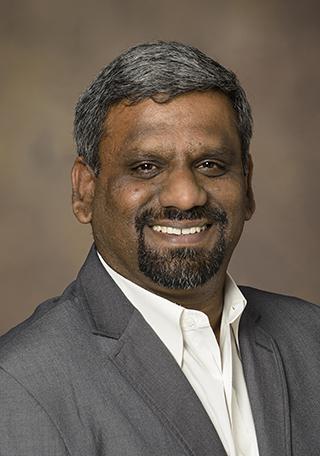 Dr. Vedantham has received numerous honors and awards.  He received the Cancer Research Award from the Georgia Cancer Coalition and the Dr. Karen Mudry Award from the Institute of Biomedical Engineering Research (IBER).  He contributed to the article that received the Farrington Daniels Award for the best paper in radiation dosimetry in Medical Physics Journal and the article that was selected as Editor’s Choice in Basic Science in the Journal of Neurointerventional Surgery.

My teaching interests are to provide didactic lectures in Medical Imaging Physics for Residents and Fellows, to provide graduate education on x-ray imaging modalities including radiography, mammography, fluoroscopy, tomosynthesis and computed tomography (CT), and to provide continuing education courses through professional organizations.

My research interests are in the design, development and clinical translation of novel x-ray imaging systems and imaging techniques with particular focus on oncological and interventional imaging. Along with my collaborators and colleagues, I have made contributions to breast cancer imaging including small-field digital mammography for stereotactic core-biopsies, full-field digital mammography and digital breast tomosynthesis. Currently, I am working on developing advanced tomographic techniques and systems for breast imaging and its clinical translation. This design, development and clinical translation oriented research is funded by the National Institutes of Health. I also conduct research in interventional imaging with a focus on developing advanced detector technology.